So very excited to be published today on Mamalode. Click over to check it out! 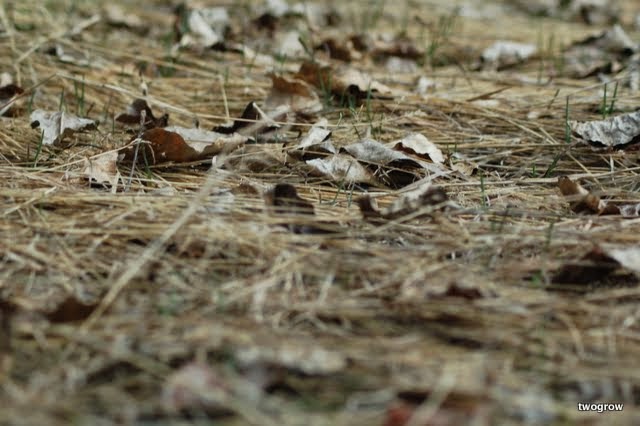 Blue sky and snow today. Plants inside and out are reaching for the sun.  Next week…peas and radishes!

Thanks for stopping by~ 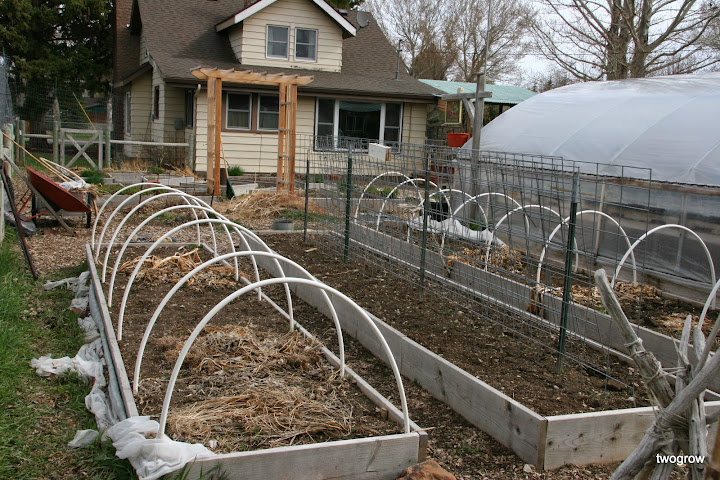 Sunshine days, full of progress.  Look at those garden helpers, one, two and three!

Tarragon, hops and chives!  Even a sunflower sprout or two! 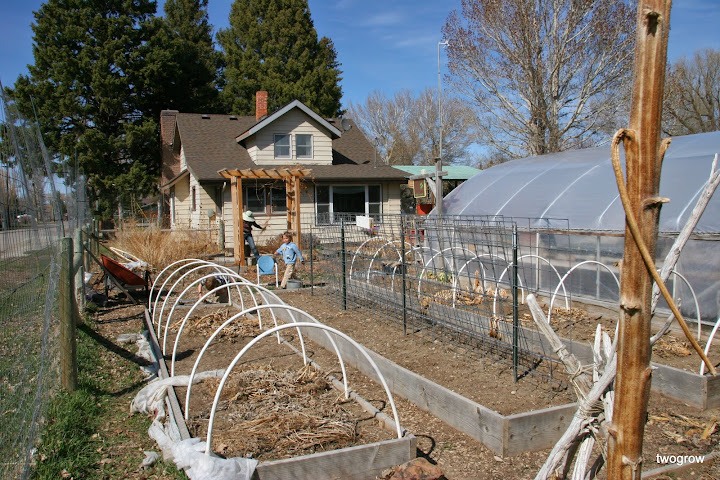 With the song of the robin spring rises up in me.  Memories of places and times past peek out here and there.  Times, seasons, events are woven together by these sweet sounds like the weaving of fibers into a nest. Robins especially remind me of time spent among gardens; gardens cultivated and gardens grand and natural.  I have fantasized that “If I were a bird…I would be a robin”…that lives in a garden, of course. 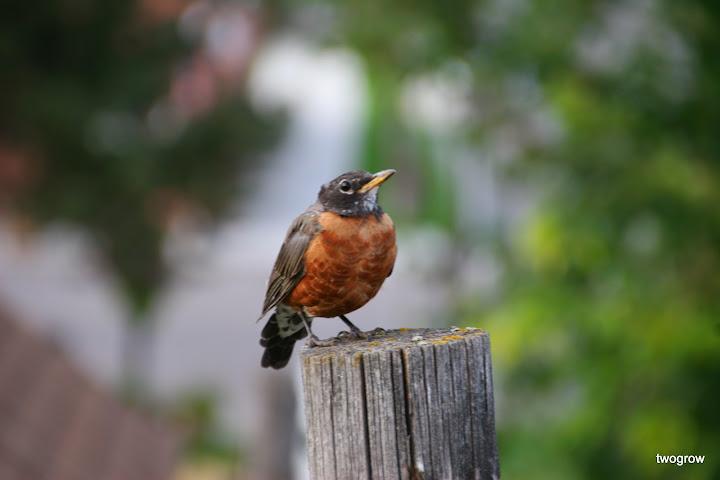 As spring rolls into our daily lives, with more time spent outdoors, running on new blades of grass, exclaiming at new growth that certainly wasn’t there when we looked this morning, the simple song of the robin seems ever present.

When I was a young girl, a robin hopping jauntily through the grass reminded me of one of my favorite childhood stories, The Secret Garden.  With Mary and Colin at Misselthwaite Manor.  Oh, those dreamy, mysteriously foggy gardens and the robin who leads Mary into the garden.  Sigh.

While in college, I worked for a dear friend, helping to shape pieces of the landscape in his beautiful country gardens.  During that time, a robin and I befriended one another.  As I turned over the ground, pulling weeds and burying the tender roots of new perennials, she watched.  As I moved along, she would scour the ground for any tender worms that I might have brought up to the surface.  I began tossing the worms out into the open for her and she chip-chip-chipped to me, and flew off, likely to her nest to share the bounty.

During several years I spent in Alaska, the song of the robin was a familiar companion in a vast land.  The sound was a true thrill to hear.  It meant that the days were lengthening and the deeply restoring smells and sights of the Alaskan summer was not far off.  In Alaska, where the days merge into nights under the midnight sun, the robins song was nearly continuous.  As we cherished the light of the endless days, the robins too called out their joyous songs.

When my son was born, almost six years ago now, we were away for several days at the hospital.  During our absence, a bold robin moved in and built a nest near our back door.  She was busy, scurrying back and forth, collecting and rearranging. Upon our return, she decided that the activity of us moving in and out of the door, and quite possibly the cries of a newborn, were too much.  She moved her nest and laid her beautiful blue eggs in a much less chaotic place.  I always thought her presence, during the birth of our baby, was such a lovely tribute.

Recently, I stood in the doorway of our back porch, listening to the evening sounds of our neighborhood.  Children jumping on a trampoline, dogs barking, the smell of someone grilling, and of course the robins.  They were like the conductors, directing the symphony from the trees.  Taking turns, calling, back and forth.  It is such a beautiful song.

Not much change this week.  We had a cold front come in, with snow flurries.  Maybe my visitors this weekend will be up for evening wine in the garden/ garden cleanup! 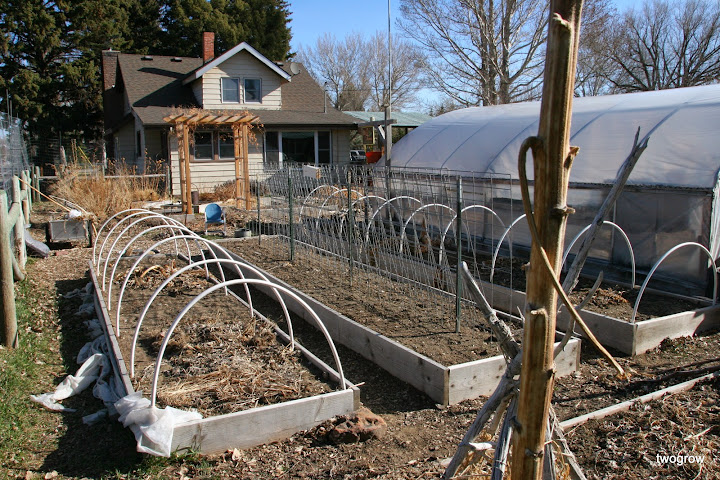 Thanks so much for playing with us!  Join us again in a few weeks for 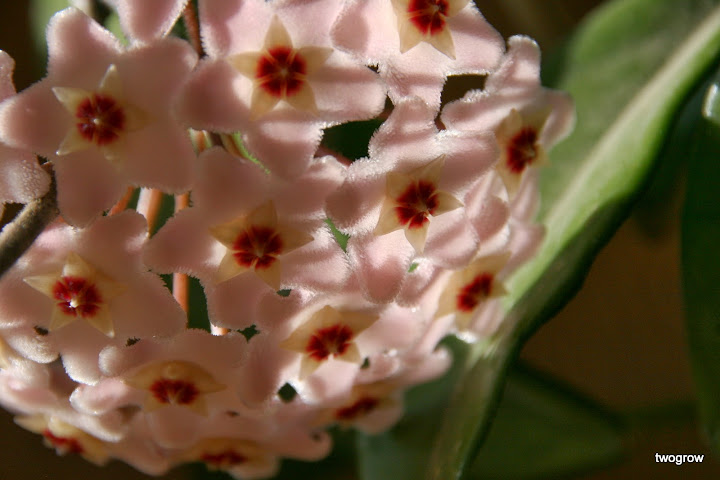 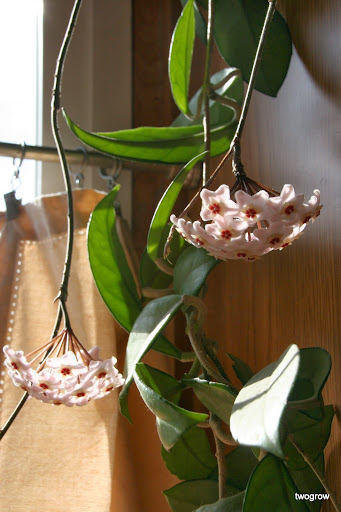 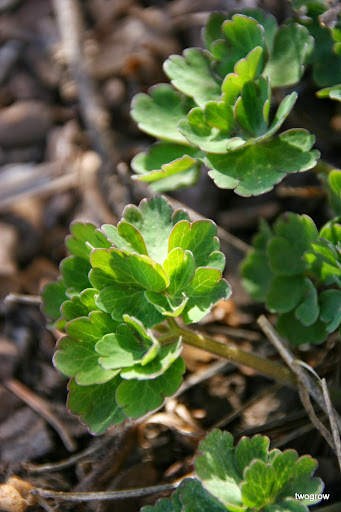 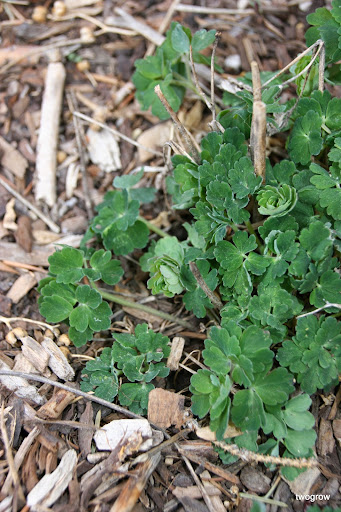 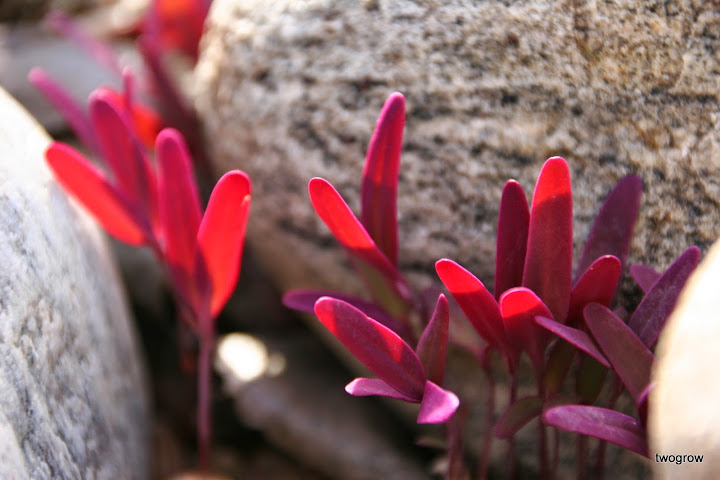 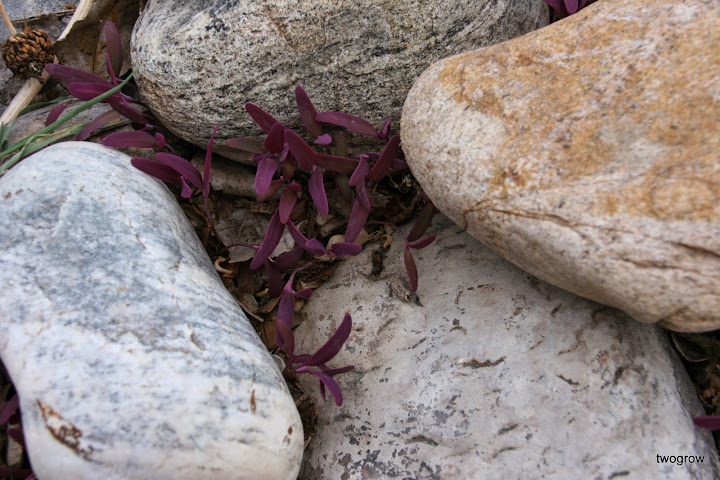 Here are our three close-up, zoomed-in, macro photos. You take a guess at the broad focus and post your ideas in the comments.  We’ll post the answers Sunday afternoon… Have fun!

Hesitating.  Yes, that is what I’m doing.  I am feeling a bit bashful about showing you my garden.  This time of year, the melting snow and ice reveal a lot of…messes.  Areas that we ignored last fall: discarded gloves, piles of refuse never properly transported to the compost pile,  spots where that sneaky (and rapidly growing!) puppy burrowed his large paws.  There are also many “gifts” that the wind has blown in for me to discover.  Hello tumbleweed.

But, instead of feeling embarrassed by my neglect, I am going to show off the garden.  In a few short weeks, I will be able to show you all how much progress we’ve made moving piles and tidying.  You will also glimpse the amazingly fast growth of weeds! And watch as we clear the beds and begin the planting of seeds and seedlings.  A favorite blogger of mine, Soulemama, gave us a peek into her garden each week last summer.  This season, I am following in her footsteps and doing the same.

Please join me, each Monday morning, for this upcoming season of growing. 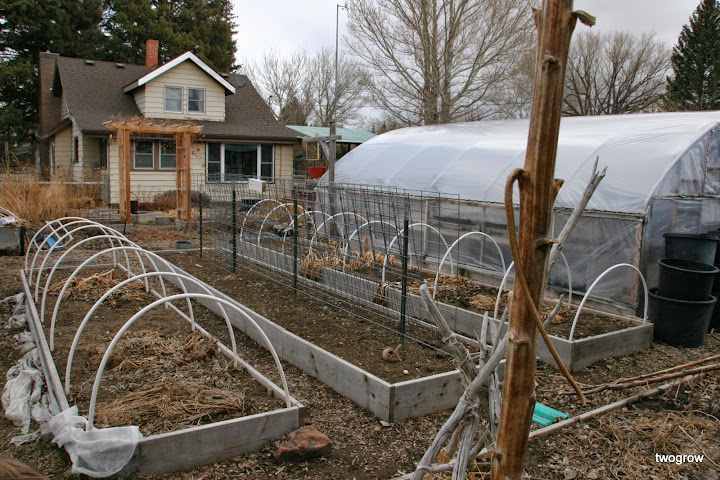 And don’t forget to share your comments! Please link a photo or news of your garden each week or whenever you feel a spark. Let’s inspire each other! 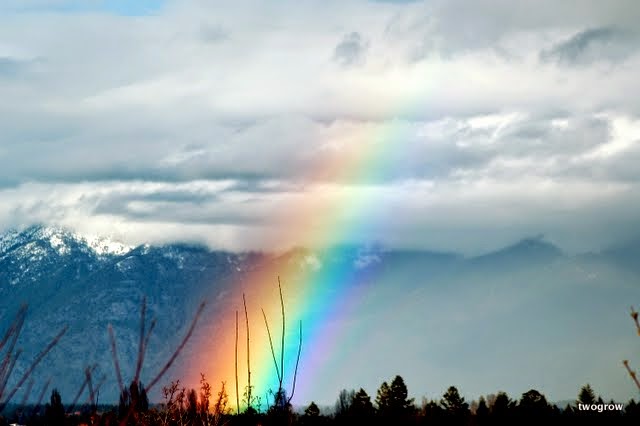 With the bucket overflowing with gratefulness this time of year, it’s hard to pick a few.  Here’s a focus on some of the less obvious gifts in the day. We’d love to hear how Spring fills you up.

3.  A talker, and a listener. (because they will teach each other)

4.  Dog hair. everywhere. (it means our friend is family)

5.  Sleety hail. (because we can eat the ice balls, of course) 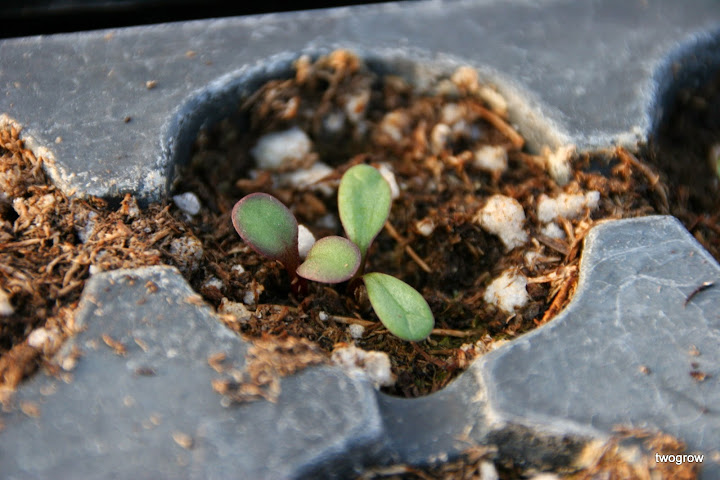 They’re out of the starting blocks!

There has been tremendous growth in the greenhouse this past week. A little extra warmth at night and several bright, spring-sunny days helped to crack open the seed coats. 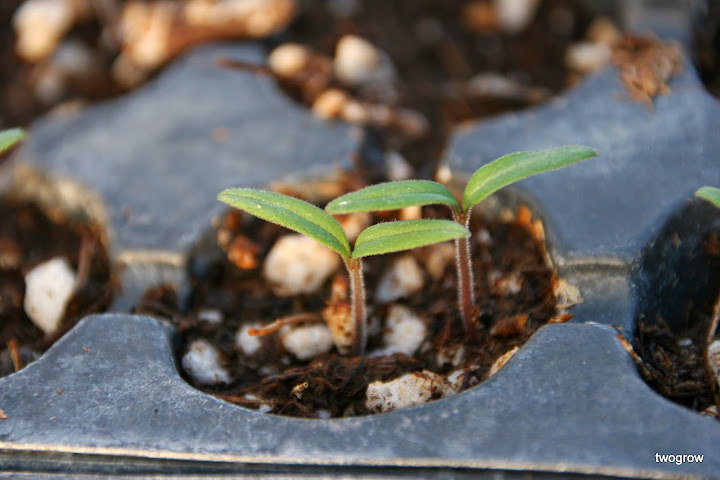 And of course, a mild, warm day means the heat goes up by leaps inside the greenhouse.  We throw open the doors for a rush of fresh air and (precise) temperature regulation. 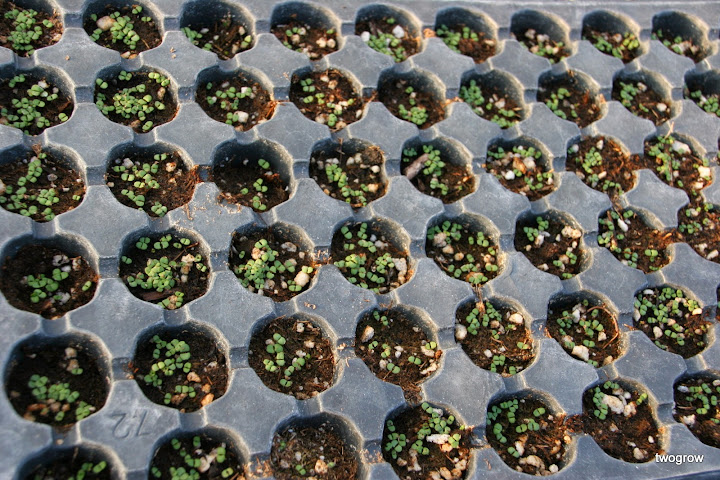 Also, not surprisingly, the day we opened the doors of the greenhouse to invite a cool breeze, our heater stopped working later that same night.  Fickle like the weather in March.  Snow, sun.  Heat, no heat. But still they (we) grow, in spite of, or probably because of, the rapidly changing micro-climate of their home.  And there is a deep joy in watching the seedlings emerge and begin. 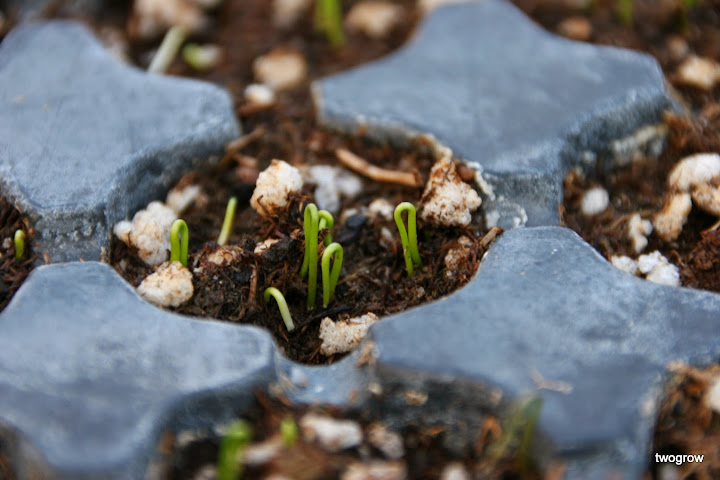 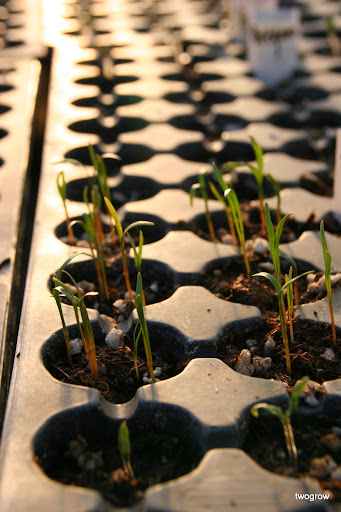 Hey, anyone feel like throwing out at guess on what the seedlings in any of the above photos are, reaching their first leaves (cotyledons) for the sun? 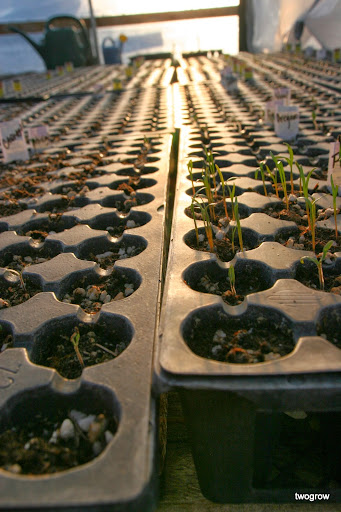 2013-2015 by grow. All rights reserved. Please do not use any original photos or content without expressed written permission.